The other day I ran into a magazine that has one of my images in it, safely packed away in my Tibetan trunk. But it dawned on me, that I really don’t have many of the items that feature my art/photography. I sold a lot through Getty Images, but rarely could I track down where the images went. I know there was a photo of my daughter being used in a Germany furniture store, but I never could find out what store.

So I set out to find the two books that had my images on the covers. The top one, “The Magic of Things Lost and Found,” came all the way from Italy (in like 3 days post…how??) I think the Italian book is the only one that has the cover photo, because the others I’ve seen a simple and titled just, “Lost and Found.” Anna thinks it’s pretty neat to be on the cover of a book!

The second book cover that I know about is the ball jar sitting in the grass, with a sparkler going off inside. (I was trying to replicate fireflies in a jar…sans fireflies.)

The last one, above, is recent. One of my Frida y Gatos paintings in the Skull Sourcebook. I got this book as a sample and it’s pretty freaking thorough. Definitely a lot of skulls in all sorts of styles-I mean, I can’t imagine any other book where my art would be within it’s pages alongside Slayer album covers!

I have a thing for antique vanities. We used to have quite a few, but we downsized but selling/giving away truckloads of furniture to Fairly Honest Bill in Portland before we moved to PA. We kept a couple, but they’re living on the third floor. So the other day when I saw the neighbors on the corner having a yard sale, the first thing I saw was the antique vanity. It had a glorious large round mirror off to the side. “We don’t need it.” I said to my daughter who was in the car with me. We didn’t…not really.

But I wanted it. I wanted it so much that I couldn’t stop thinking about it. I drew out a quick sketch for my next painting, which just happened to have that vanity in it.

So when my Mother went out to pick up lunch, and came back immediately to tell me about a piece of furniture we needed, I knew she was talking about that vanity. I said, “It’s the vanity, isn’t it?” She said, “IT’S ON THE CORNER, FOR FREE!” I jumped in the car and we drove up the hill to the corner and jumped out. They couldn’t sell it at the yard sale, so not wanting to bring it back into their house, they put it out for free! It’s beautiful. It’s not in perfect shape, the veneer has seen a much better day in some spots, but I honestly don’t care. The drawers are solid and the mirror is amazing. =)

Well, it wasn’t actually pink snow, but the hue was definitely pink when I took these photos today. =P

I’m sure some of you know by now, that my children are half-Icelandic. Even though we no longer live in Iceland, it’s always fun to participate in the traditions. Sure the Jólaköttur is not going to come all this way and eat either child because they didn’t get new clothing to wear before Christmas…because obviously I’ve bought them new clothes to wear! But still.  I looked through my stuff and came across the Jóla Spil card deck, and decided to take a picture each of the 13 nights with the yule lad who’s said to visit. Tonight it’s Stekkjarstaur, or the sheep worrier.

Gimpy was the first,
Stiff like a tree.
He snuck into the stables,
And fooled the farmer’s sheep.

He wanted to suck milk from them,
– They did not care for that,
And because he had peg-legs
– It did not go too well.

Hooray! It’s kind of a big deal in our house! Ok, not really, since every day is “cat day” in our house. Still, in honor of today, I figured I’d stalk my children (who always have cats nearby) while they’re in cyber school, and take some pictures. (Really any excuse to take photos…)

*Edit, I realized I should probably toss in a watercolor I did this morning, in honor of today. =P

This year’s spring and summer rain really hindered our garden this year. The soil was so wet, that under the squash and pumpkin plants mushrooms were growing! Anyway, we decided to let the chickens have the run of the garden, so they can clean out the beds and we can get ready for next time.

Of course the chickens were more than happy to oblige! Going right for the beds, laying their eggs in them, and kicking up dirt! I only asked that they leave the marigolds and nasturtium alone.

We also had to make sure we covered the potato area with chicken wire. Still holding out hope that the potatoes will get a bit larger than cherry tomatoes. =P

Anna picked a marigold for her hair, so I took a quick portrait of her by the sunflowers. 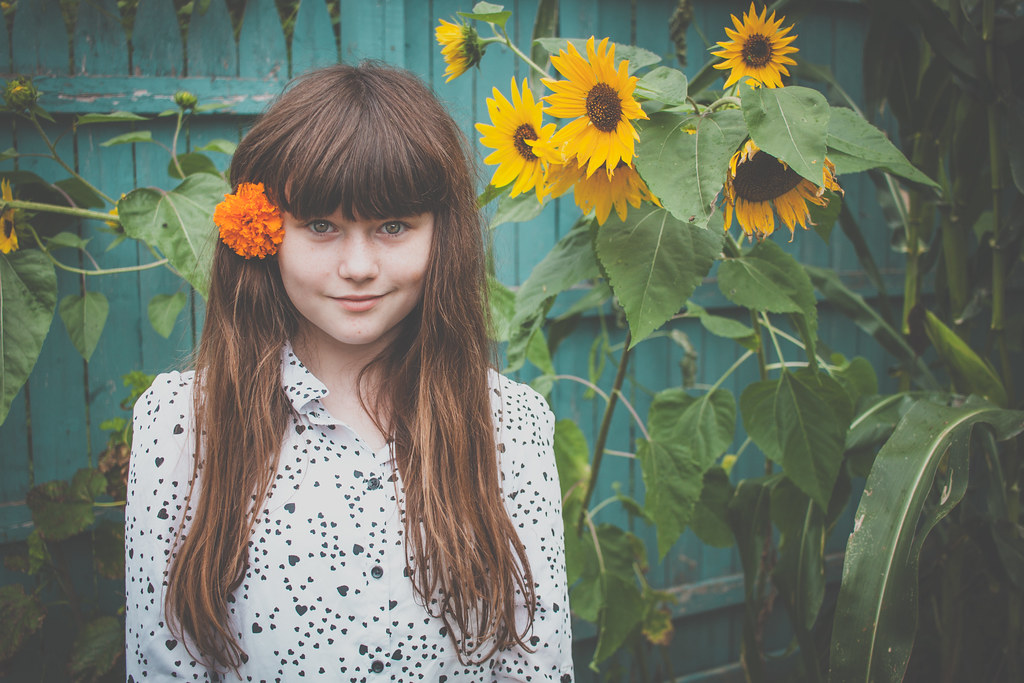