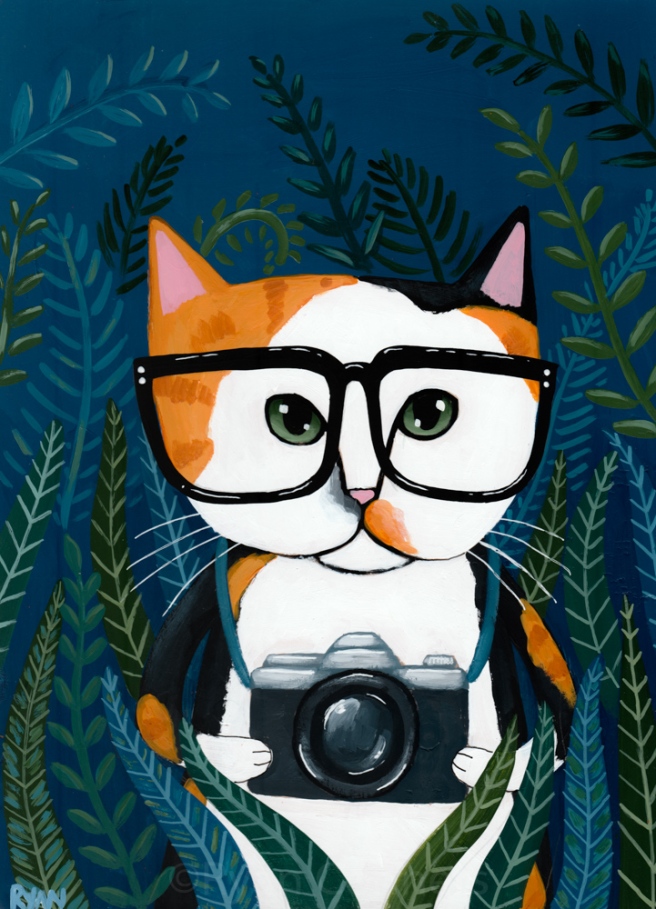 -Painted with Golden acrylics.
– 10″ x 7.25″ Piece of wood
-Topped with two coats of matte varnish.
-Signed, titled, and dated on the back by me!

This adventurous kitty was looking for jungle flora and fauna to photograph! 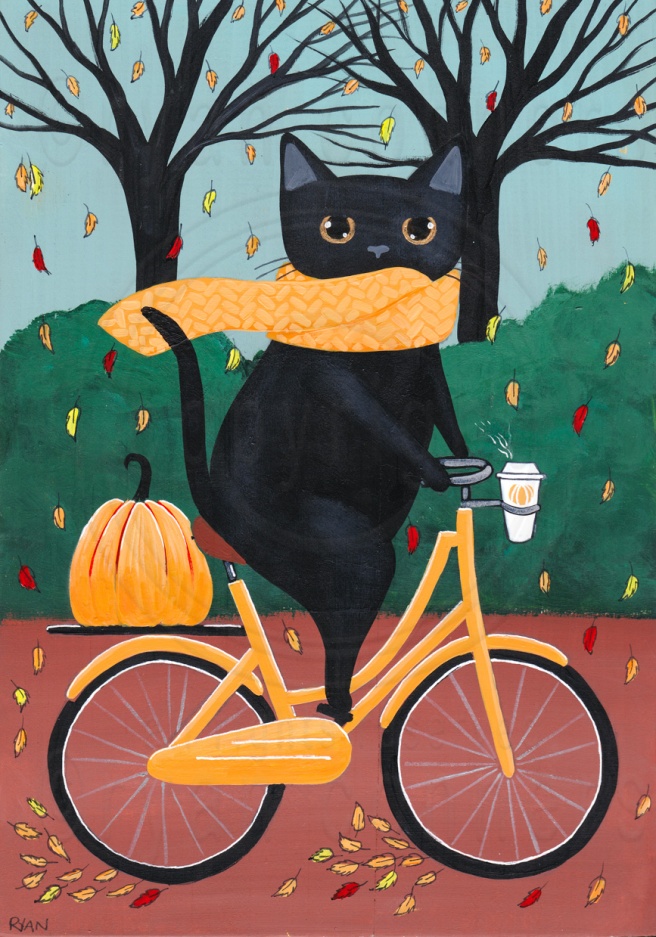 This kitty was ready for autumn! With his scarf, coffee, and pumpkin, he thought it was the purrfect day for an autumn bicycle ride! 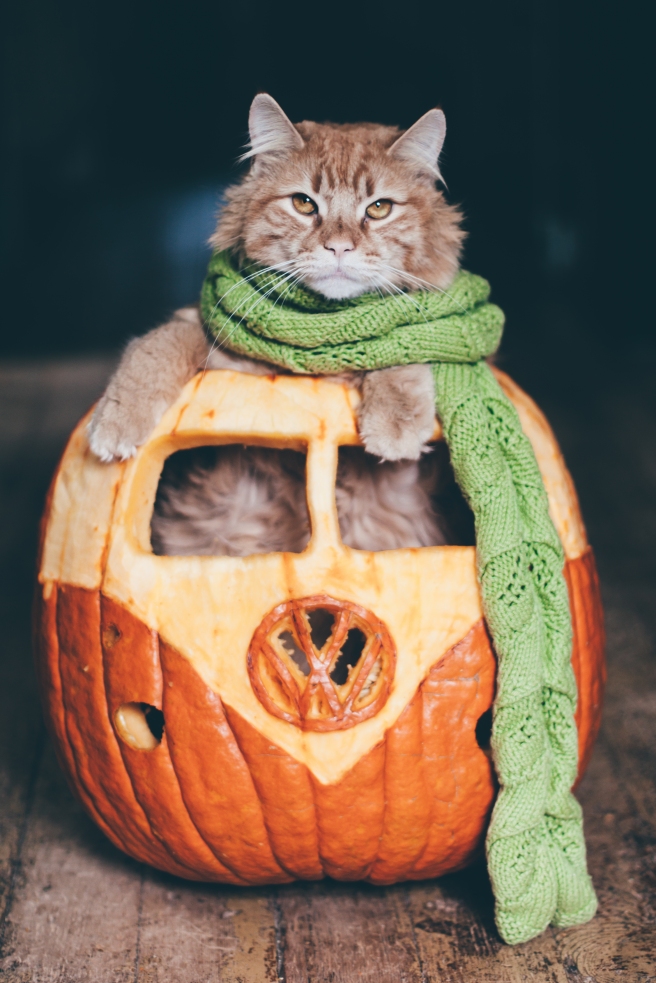 Another Halloween success! I managed to pick the perfect sized pumpkin for Rosebud this year, and he looked so cute sitting in it! 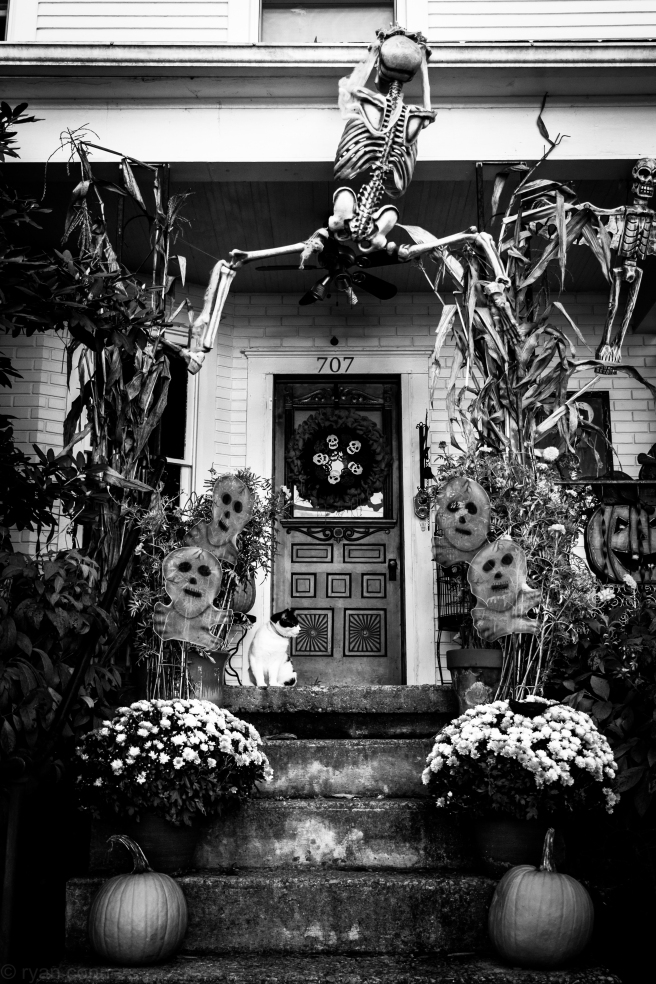 Front of the house, with Bandit the neighbor cat, who always stops by for a picture, and a bowl of food.

Bandit made sure to show up at night too, for more photos and food.

We should just call Bandit our porch cat, since we’re always feeding him, he’s always on the porch. We even ended up buying him a flea collar since his owners failed to do so. (Who’s in the window?!)

My daughter thought she was going to dress up as a rotten clown this year. I may or may not have gone over the fact that she hadn’t yet acknowledged her Icelandic/Norwegian heritage, and that maybe she should pick a goddess to dress up as. We went with Hel. =) 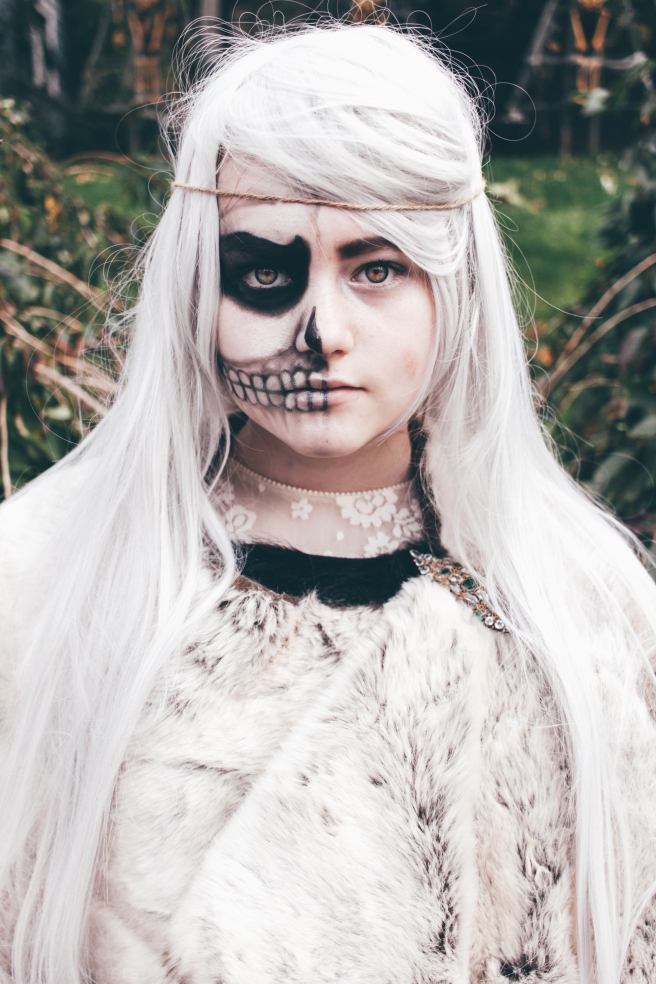 I hadn’t fully planned out the outfit. She told me a day before this photo was taken, that there was a trick-or-treating event in the mall, and her friend invited her to go. Thankfully I have a thing about saving fabrics, and we just so happened to have some faux fur laying around. Was it an outfit the goddess of the underworld would wear? Who knows, but it worked! 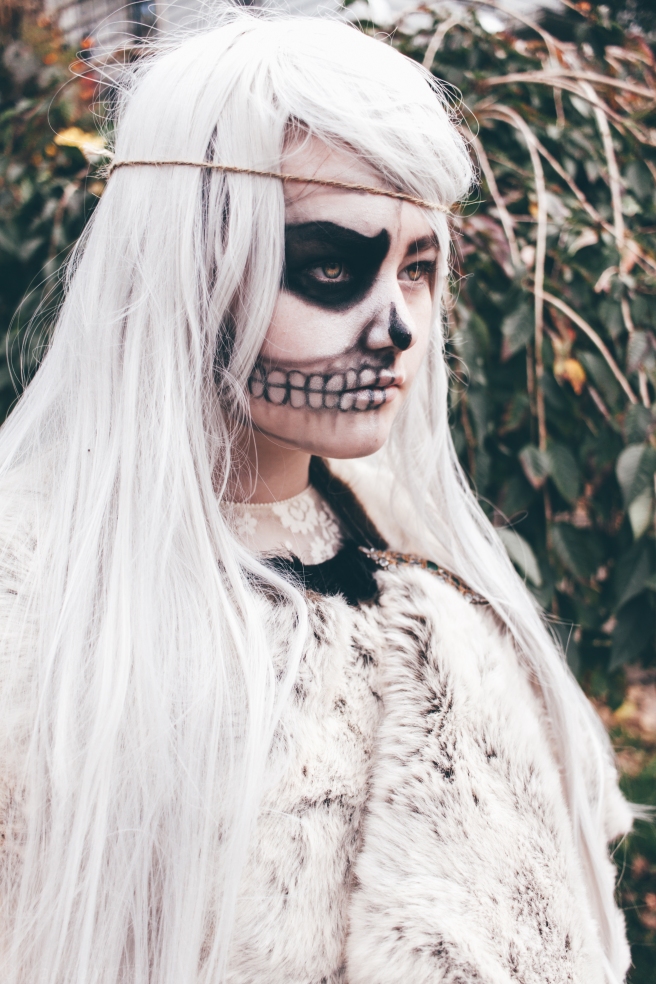 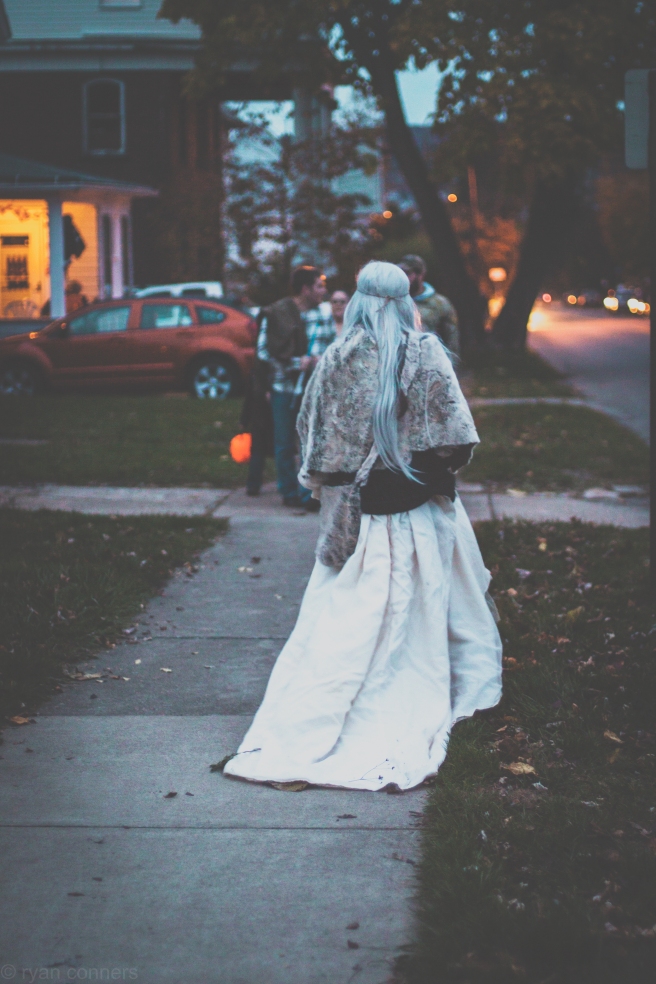 Taking Anna trick-or-treating. Also doing our part by cleaning the sidewalks with the train of the dress.

My Mother had waited on the corner, as we went to the last house of the night. Walking towards my Mother, she looked pretty creepy. The picture ended up out of focus due to how dark it was, but I like it!)

Me and my Mother. We decided that the three of us (my Mom, son, and I) would just be simple skeletons this year. 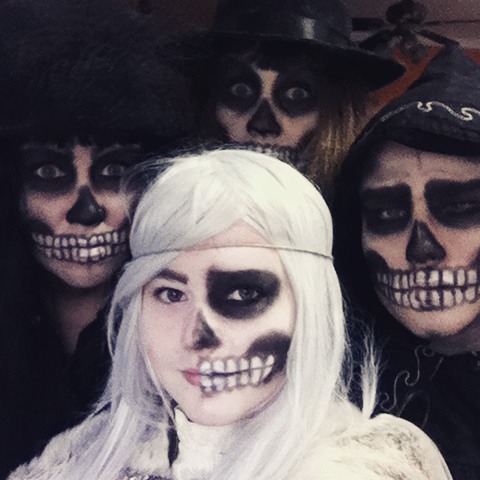 Family of skeletons and Hel. =P I hope you all (who celebrate) had a Happy Halloween!

Hooray! It’s kind of a big deal in our house! Ok, not really, since every day is “cat day” in our house. Still, in honor of today, I figured I’d stalk my children (who always have cats nearby) while they’re in cyber school, and take some pictures. (Really any excuse to take photos…) 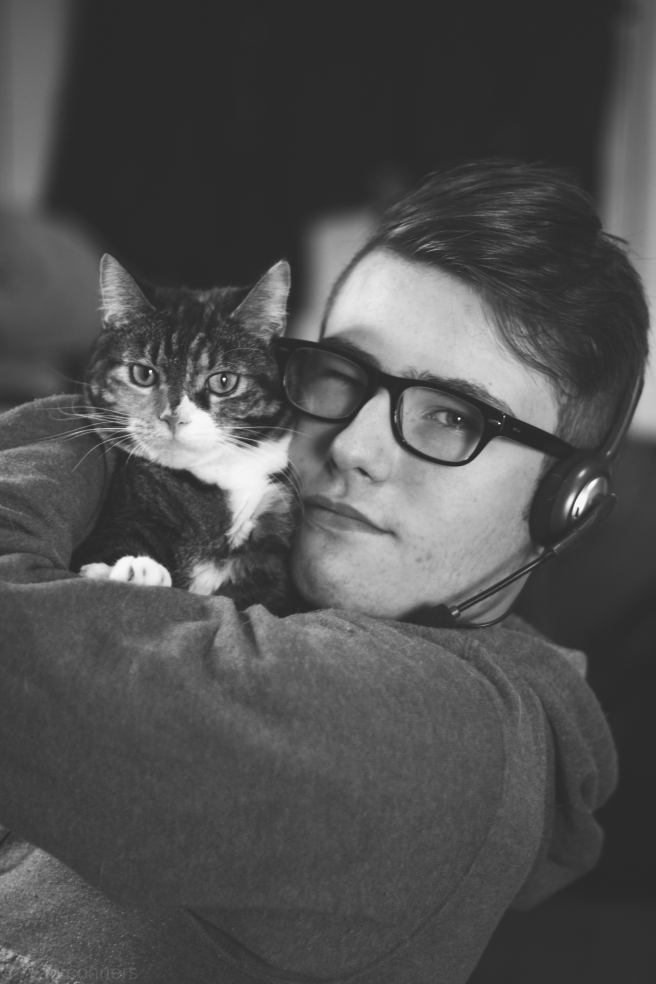 *Edit, I realized I should probably toss in a watercolor I did this morning, in honor of today. =P 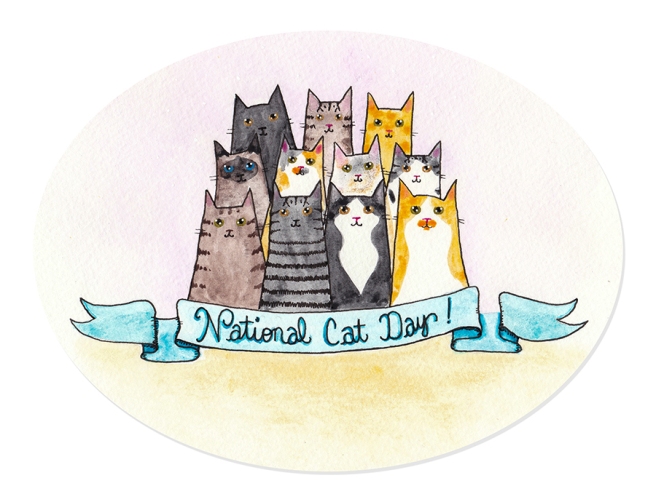 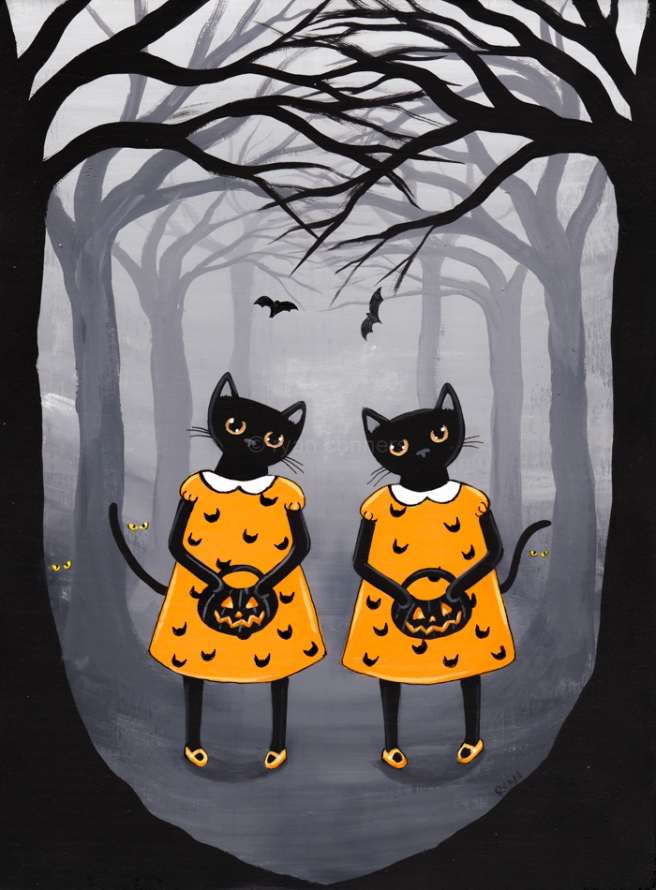 The twins thought their matching Halloween dresses were the cutest! So they decided to wear them to the Halloween party!

Some snaps of cats around the house… 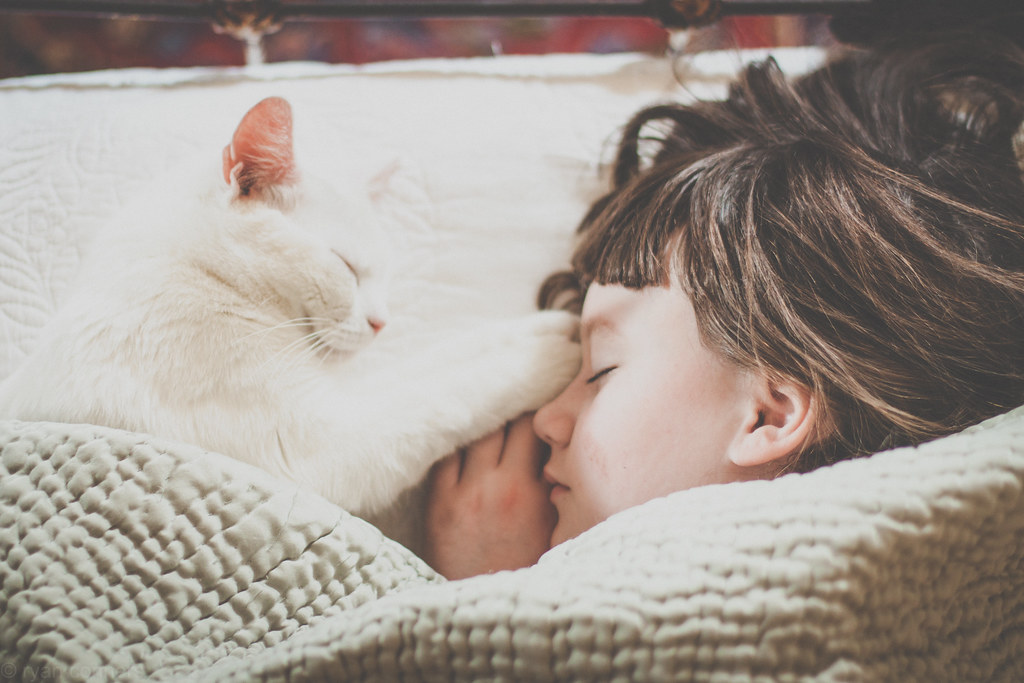 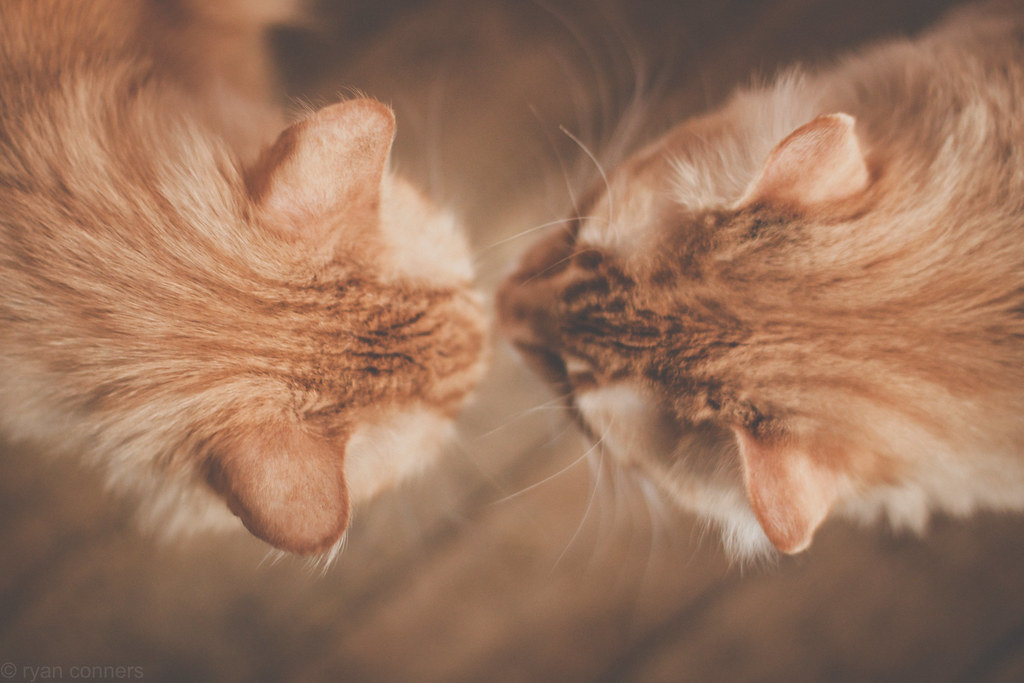 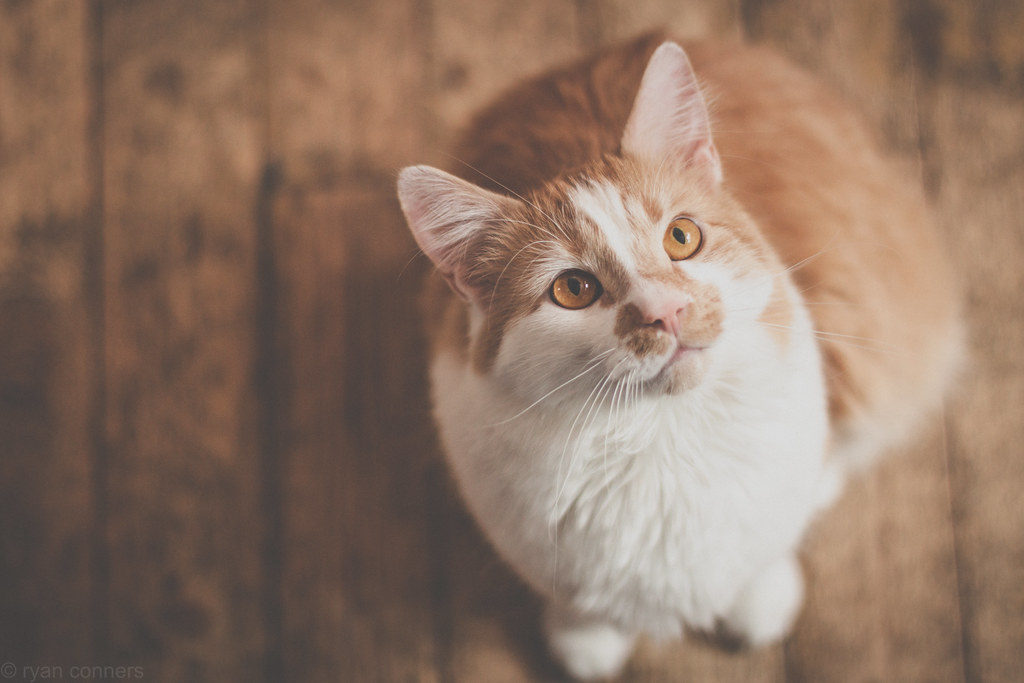 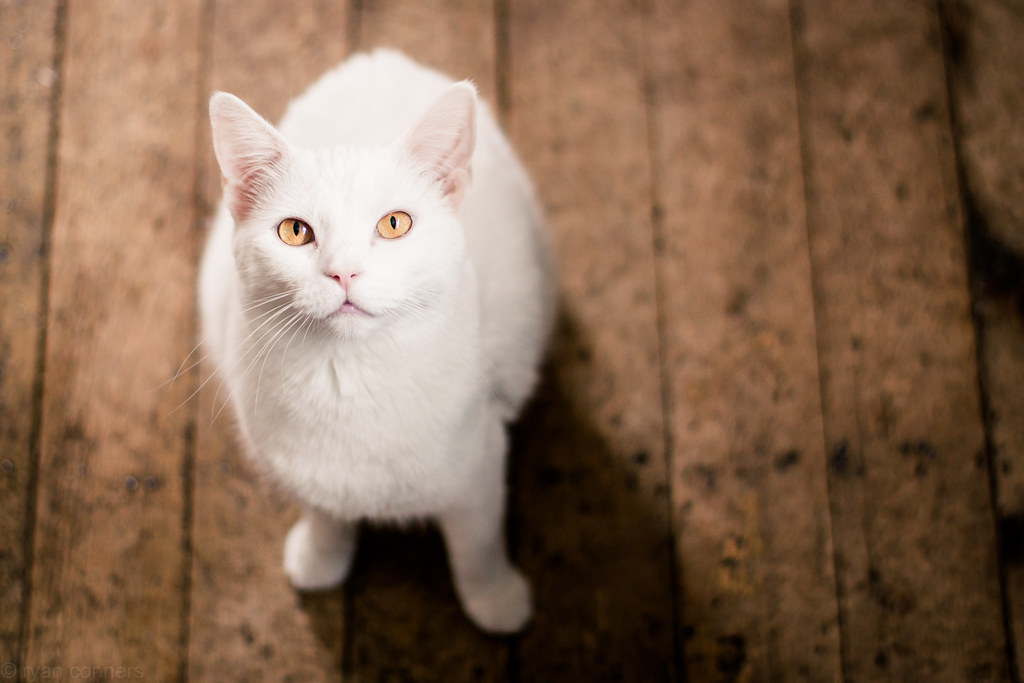 Pierre, the black kitten, has played fetch for quite a few months now. He prefers socks and gloves, as well as his favorite toy “mousy.” None of the other cats really paid any attention to the game. Sure every now and then someone would block his way, but he always would find the glove and bring it back. For some reason, Rosebud finally decided he wanted to play fetch too! He did it a few times before I decided to run and grab the camera. However, naturally when I figured out where the record button was on the Canon, he was pooped out. 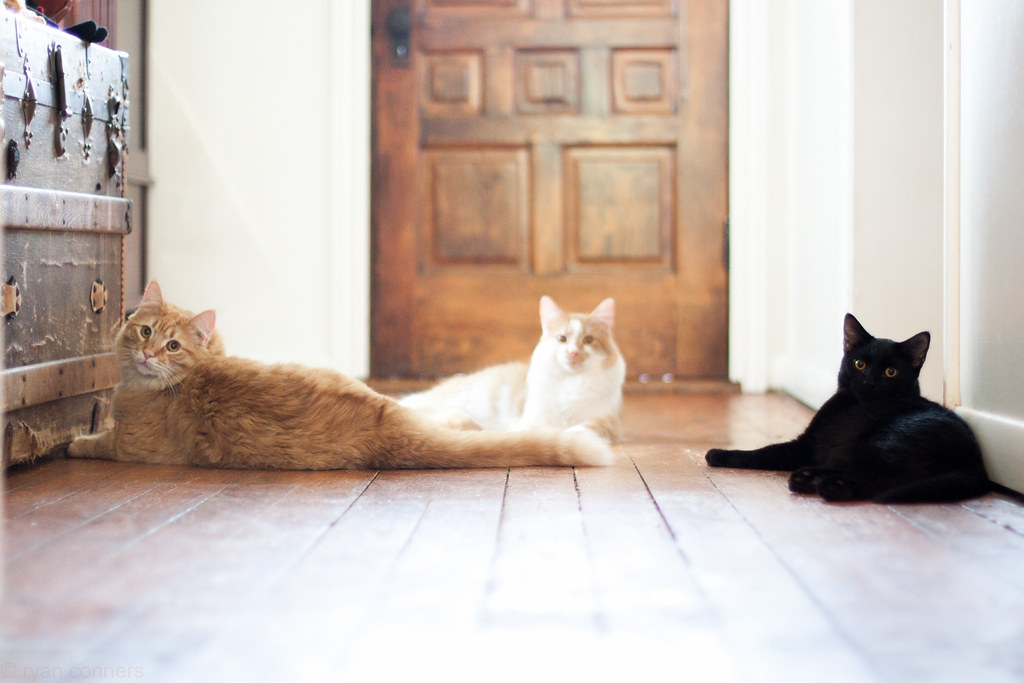 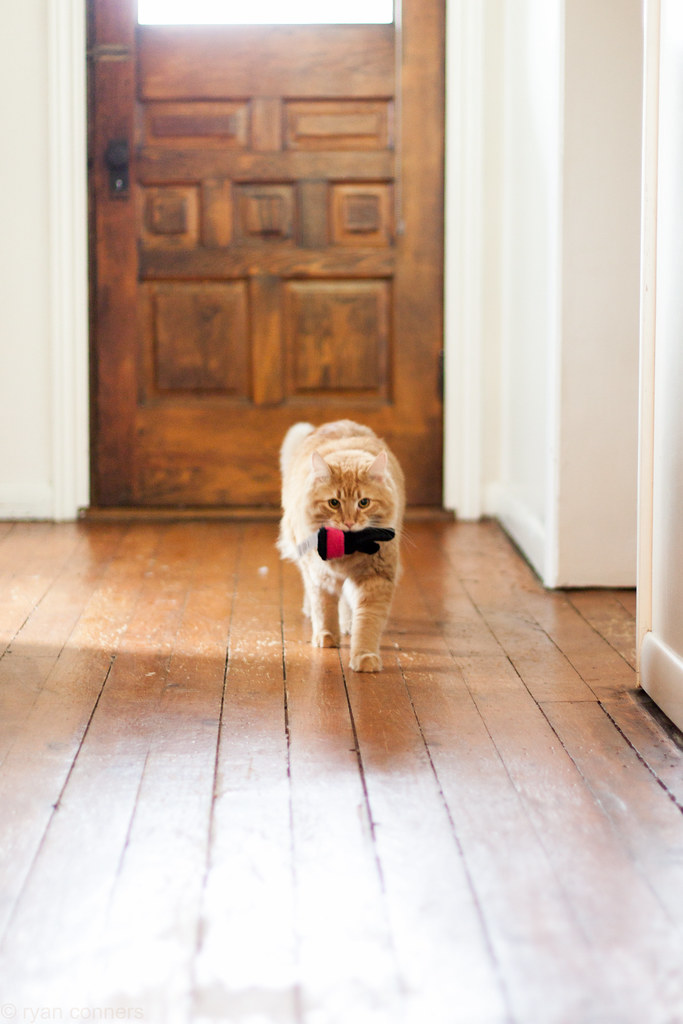 So I decided to paint some larger paintings which causes a problem with my being able to scan the artwork. I grabbed a chair, headed downstairs, and found a window for some natural light. This shouldn’t be a problem. However, when trying to photograph something OTHER than a cat, when cats are around, the cats will make themselves known…

Oh that Basil and Charlie are at it again! Scaring the poor kittens by posing as a ghost outside their window! I’m not sure the kittens will ever fall asleep.

So almost every morning I hear about a story about  “the shadow girl,” “the face in the window,” “the little boy is back,” from my daughter.  My daughter, Anna, aged 11 in July has always had these sort of stories. She’s been a co-sleeper basically all of her life. No matter what I’ve tried, she won’t sleep alone in her room. We’ll have a night when we think all is well, there are cats with her (for protection) and a nightlight left on. But without fail, 2-3am she’ll be standing by my bed, scaring me awake, with some story. Now, as a person who’s childhood was normal, sans the ‘ghosts’ who grabbed my legs, my arm, put me in a state of fear locked in a bathroom with doors ratting, I kind of have a soft spot for these ‘stories’. What if she’s telling the truth? Do I want to be the parent, like my own, who just never believed her? Or, if I say I believe her, will that perpetuate more stories? I don’t know. I try to use logic, “Well, cats are highly perceptive to ghosts and whatnot, but you clearly see the cats are still on your bed…” It doesn’t work. 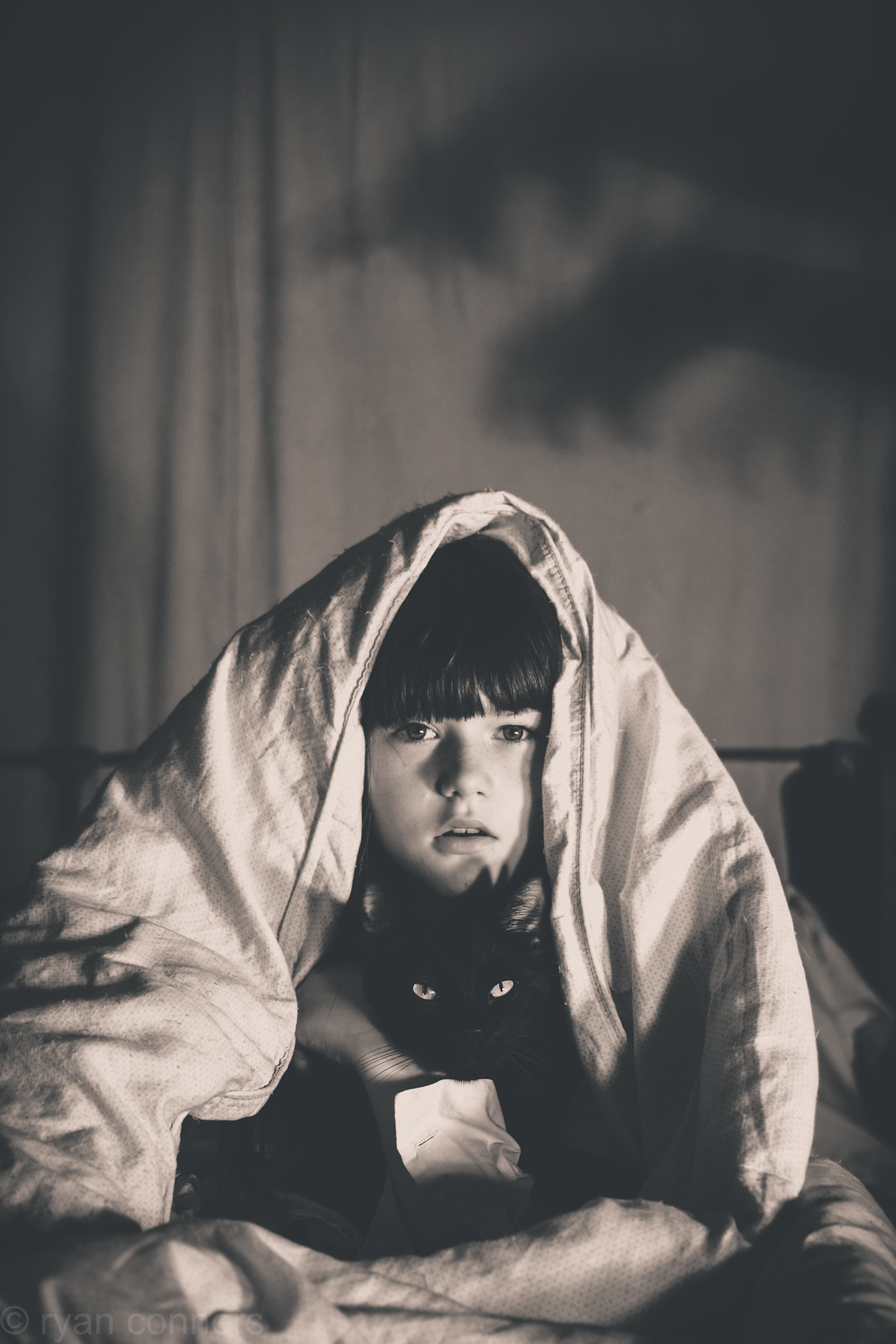 SO, while I have no fix to this current situation, I figured might as well turn her stories into photos. Starting with the shadows. Ok, long story short, or long story kind of short… When I was stationed in Keflavik, Iceland (Navy) I shared a barracks room with another girl, but she was never around at night-she usually spent the nights with her boyfriend. One night as I’m laying down to go to sleep, the minute I shut my eyes I hear my Mom. Now back at home my Mom *always* woke up singing to the cats and our Rottweiler Vinnie. I opened my eyes and was looking out of my old bedroom, to the backdoor where she was standing and singing. It was nice and seemingly normal. Then instantly I realized…wait a minute, I’m not at home! The room went dark and there I was, back in my room in Keflavik. As my eyes started to focus on the shadows in the room, one caught my attention. It was the shadow of a man leaning against the far wall. My whole body started to shake as I stared in horror. Slowly, very slowly, this shadow slid down the wall into a crouching position and just stayed like that. I was in a panic, it didn’t make sense. I willed myself as hard as I could to close my eyes. As soon as they were shut the shaking stopped. I opened my eyes again and the shadow was gone. Totally freaked out, I jumped out of bed and turned the lights on. I sat up in bed until eventually I fell back to sleep. 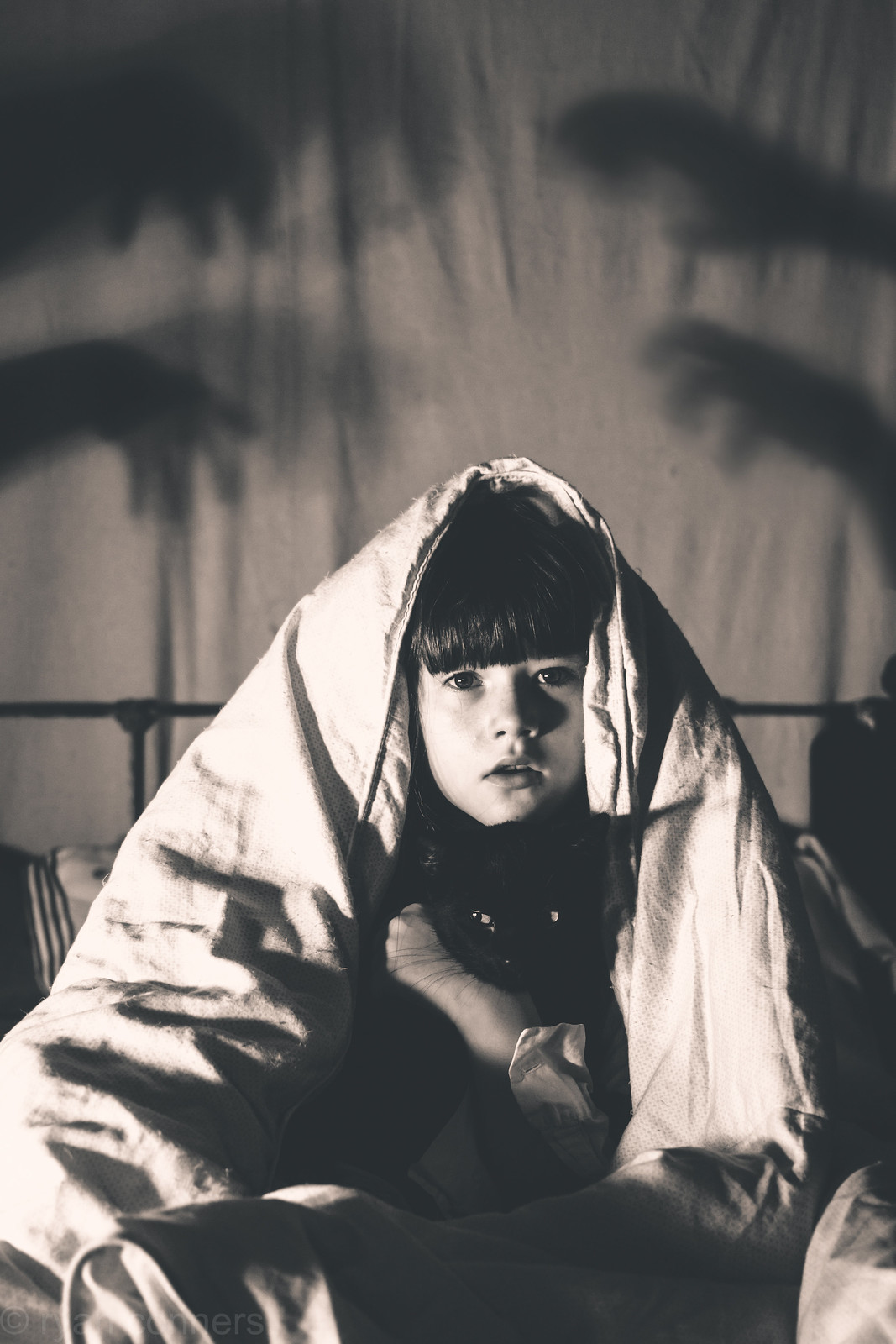 About a week later, I was getting ready to sleep again. Pretty much the second I closed my eyes I heard a slow, sad whistling. Again, my whole body starts shaking and as I open my eyes, I see a shadow figure crouching right in front of me! Instantly I’m able to shut my eyes and the whistling and shaking stops. Hysterical, I jump out of bed, turn on the lights, open the blackout drapes (24 hour sunlight), and stay up until it’s time to go to work. At this time, I’m totally freaked out and have to tell someone. At the risk of sounding like a lunatic, but knowing I need to get out of that room, I tell my CO, who refers me to the Mormon chaplain in the IT department. I get a room transfer and the shadow never returns.

I realize this could very well have been the result of a wake-initiated lucid dream, but really…it was so crazily real to me, both times. I have other stories, things that happened in broad daylight, even with other people around, but I won’t go into those now. So yeah, child’s imagination, or…

This kitty is over winter and is ready for spring! Also there's a flash 25% off all original paintings sale I just decided to have!
Hanging with Moosey Moose waiting for vet to come get him from the car for checkup. #cat #gingercat #volvo
Sometimes you just hang out with a cat, you know? #cat #gingercat
It's a lazy Sunday.
Do you know where Wally is?! Stealth watching me and the cricut. #cat #sillycat
Happy #Caturday! Newest painting: Amsterdam Spring Bicycle Ride!
Follow Ryan Conners – KilkennyCat Art & Photography on WordPress.com