This is Stevie’s story. Stevie is a beautiful cat who was brought to our neighborhood by the next door neighbor’s adult son. He’d just moved back in to his mother’s house and brought with him a cat he found at his previous location. Naturally, Stevie wasn’t fixed and it took no time at all for her to get pregnant. Stevie frequented our porch to have a bite to eat, as we always have food out for the feral river cats, so we got to know her. She had three kittens in a closet of the neighbor’s house, and because they failed to provide any flea treatment, they kicked her and her flea-ridden kittens outside on the back porch in a box. One kitten was given away and they kept the other two and then decided Stevie wasn’t allowed in the house anymore for failure to get along. I understand people have outside cats, that’s fine, but what isn’t fine is having outside cats who aren’t vaccinated and spayed/neutered. So the inevitable happened. Stevie got pregnant again.

Then it started snowing, winter arrived and it was freezing cold outside. Stevie, as mentioned earlier, frequented our porch and turned to sitting on the back of our wicker furniture, looking in the windows at us. Sometimes pawing the glass. Our hearts melted and we realized she had no shelter and it was our job to provide some. Knowing she wasn’t fixed (it was already driving our indoor cats insane) and knowing her reputation of not getting along with others, we made my daughter’s room into Stevie’s Mother-in-waiting room. There she would be warm and safe, with ample food and water and love if she accepted it. I think she’s semi-feral, but having our own semi-feral cat already, Lily, we know to give them space and give love when it’s requested. It seems like Stevie has been pregnant forever, like literally forever. 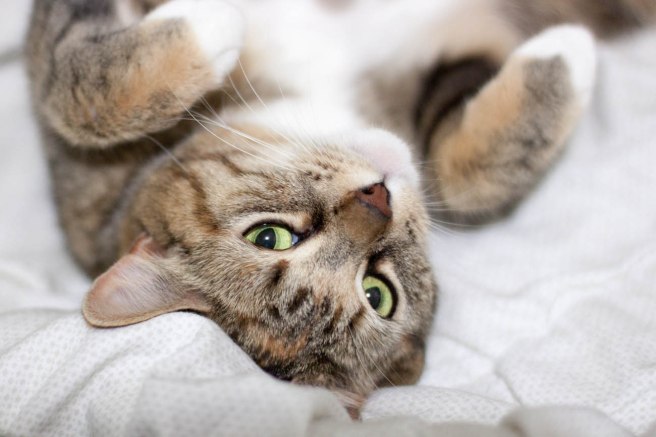 Then finally, last night I went in to her room to spend some time with her, as she’s become increasingly loving, and I noticed a change in her behavior. She was bearing her stomach, allowing belly-rubs, and then I noticed a bit of discharge: the time was upon us! I grabbed my pillow and a blanket and moved into Stevie’s room to stay with her while he labor progressed. She seemed to really want the company, even crawling under the covers with me and purring so loudly, pussy-footing the air. Every time I would doze off, Stevie would pounce on the bed, meow, or wake me up by licking my face. The sun came and no kittens. So we took turns staying in the room with her, my Mother, my daughter, and me. It was on Anna’s watch that the first kitten arrived, feet-first. A sweet black tortie, with a white mask, stomach, and tiny white feet! He/she has been named, yes, named by my Mother as Willow.

An hour or so passed and Stevie had her second kitten, a beautiful ginger kitty we named Rosebud after our beloved Rosebud who passed 6 years ago. It’s been quite some hours since Rosebud was born and we’re thinking that’s it. Two kittens. /phew 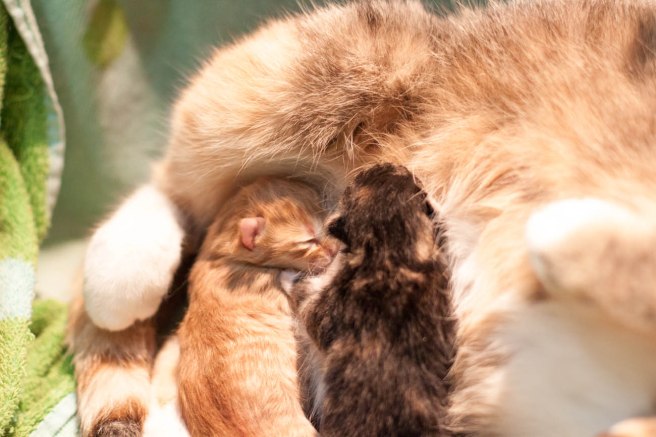 They’re going to live with us because, well why wouldn’t they? Stevie will not be kicked out on to the street, we’re going to raise funds to get her fixed, as well as the kittens, AND the two kittens from next door (her first litter) who still aren’t fixed…and by the way are catching and killing bats. Did I mention they haven’t been vaccinated either? But I’ll save that rant, because today we’re celebrating two little lives, and the life of their mother, that deserve all the love we can give them. This was how we spent our April 12th, 2013.

**Update** A third kitten arrived overnight! I walked in Stevie’s room to check on her and there was a little grey kitten in the mix! We’re doing a fundraiser to get all of Stevie’s kittens fixed and vaccinated, including her two kittens that are killing bats…that live next door. If you can help: http://www.gofundme.com/2kzqvg Thanks so much!

One thought on “Pregnant and Kicked Out – Update!”